This year marks the 186th Oktoberfest in Munich, Germany, and if you read our last column you know Tallahassee is a big fan of all that entails – traditional garb, schnitzel, brats, and beer!

While not running up on 186 years any time soon, all great traditions must start somewhere, and the 3rd Annual Oktoberfest at Township is quickly becoming one of our favorites. This year’s festival, set for Saturday, Oct. 5, from 2-6 p.m., promises to be bigger, better, and more Bavarian than ever.

Township is pulling out all the stops to convert their red brick beer hall into the traditional tents associated with Munich. The event starts where any great Oktoberfest should – with beer – in what might be the largest assemblage of German (and German-styled) beers at one time in Tallahassee. Township is utilizing all 32 draft lines and a lot of cooler space for more than 50 German beers on tap and in package. Offerings will also include some locally brewed festbiers from all four area breweries: Proof, Deep, Ology and Lake Tribe.

Beyond the beer, the festival will feature traditional decoration, food, and music, all presented with the flare that the For The Table Group (Madison Social, Centrale, Township, etc ... ) has come to be known for.

All ticket holders will enjoy unlimited beer sampling, a commemorative tasting glass, and a liter of any festival beer. Tickets can be purchased at TallahasseeOktoberfest.com. 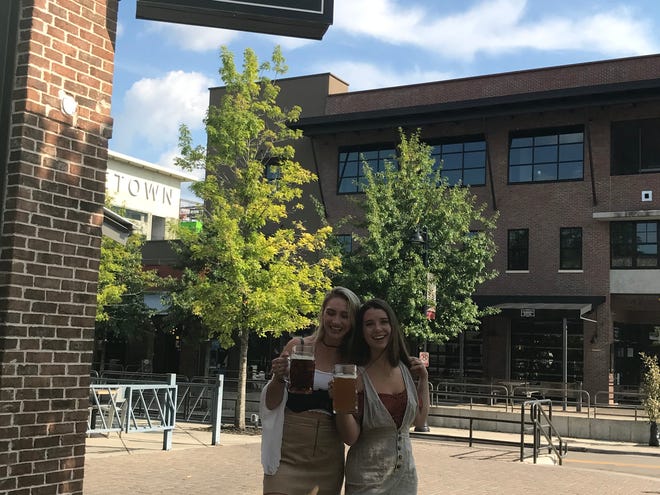 There might be only one beer event that rivals Munich’s Oktoberfest in terms of popularity, scale, and number of beers, and that’s the Great American Beer Festival in Denver, Colorado.

Each year, thousands (more than 60,000 in 2018) of hop heads, stout sippers, and sour seekers, descend on Denver to celebrate…well…beer.

After a successful 2018 trip for Tallahassee's own Ology Brewing Company – one that saw their fruited Berliner “Juice Lab” rated as a top 50 beer on the popular beer enthusiast app Untappd – Ology returns to GABF this week. In addition to pouring at four different 5-hour sessions for the festival itself (running from Thursday through Saturday), head brewer and co-owner Nick Walker, assistant brewer Alex Stowers, and co-owner Max Arendt will be pouring Ology beer at five other events around the city and attending the can release of their collaboration with Denver’s New Image Brewing.

Pre-party events, typically featuring cooler spaces, shorter lines, more interaction with brewers, and some very cool small-batch releases, surrounding a major festival often draw a more fervent craft beer crowd than the headlining festival itself. And Ology is being featured alongside some highly regarded breweries such as Casey, Weldwerks, Other Half and Forbidden Root, just to name a few.

With the amount of planning and brewing required for their 4-day run in Denver, Ology couldn’t be blamed for mothballing its local Oktoberfest plans this year — but fear not! The date for their annual Oktoberfest celebration has been announced, and it is going down Oct. 19 at 11 a.m. Join Walker and the rest of the Ology crew at their 6th Avenue brewery for a day of lagers and lederhosen.

While a lineup of beers will certainly be offered, Ology has been lagering two special beers for months in anticipation of this event. Pair these offerings with some delicious German fare from their Food Lab, and this is a day that promises to be delicious!

We didn’t coin the saying “Drink Beer. Do Good,” but whoever did certainly nailed the overwhelming amount of philanthropy our local breweries have shown over the years. One such endeavor is Deep Brewing Company’s “Monthly Mission.”

Each month, the team at Deep selects a featured beer whose sales will help raise funds for a selected organization/charity. For the month of October, Deep celebrates the advancement of breast cancer research with the launch of "Sea Dragon" – a beautifully pink Gose featuring red dragon fruit and passion fruit that packs a face-puckering tropical punch.

During the month of October, $1 from every pour and $2 from every growler fill of Sea Dragon will go to the Cancer Research Institute.

If a sour isn’t your style this weekend, you’re in luck! Deep is slated to tap "Hydrospace" on Saturday, a New England IPA that does not skimp on the hops and has a smooth juicy finish.

Once thought to be a desert for independent beer, Florida has long lagged behind the rest of the country in regards to breweries and production per capita. But this week Forbes published an article titled, "No One Laughs Anymore At The Florida Craft Beer Scene," and it outlined just how far the state’s scene has come. Leaning on the in-depth knowledge of our friend and Florida Beer Blog founder, David Butler, the article featured 13 breweries from different regions across the state that have done yeoman’s work in raising Florida’s game.

It should come as no surprise that Tallahassee's Lake Tribe Brewing Company, as well as our pals at Halpatter Brewing in nearby Lake City, were two of those mentioned.

Lake Tribe, with the ambiance we affectionately refer to as “The Tribe Vibe,” perfectly encapsulates the tailgate, bonfire with friends, shindig nature of North Florida’s beer culture, while producing some memorable beers. Specifically mentioned by Butler was Lake Tribe’s Wildwoods barrel-aged sour project, which should see Volume 3 (2019) bottles released over the next few months. They go quickly, so keep an eye out.

Sure, the calendar says autumn but the temperatures still scream summer, and when life hands you 95 degrees in October you make…a run to the beach!

On Sat., Oct. 26, the Tallahassee Brew Bus sets course for serene St. George Island, where sandy beaches, cool water, and tasty brews will be on tap. After an afternoon of sun and suds (featuring Oyster City Brewing Company cans donated by the Tallahassee Beer Society), the bus will swing by SGI icon Harry A’s – which just reopened after being badly damaged by Hurricane Michael – to enjoy great food, music, and $3 pints for Brew Bus riders.

The bus makes one last stop along the “Forgotten Coast” at Eastpoint Beer Company for their signature brand “Brews with a View” — delicious beers enjoyed overlooking the bay – where riders will also enjoy a $3 first pint. In addition, small bites will be provided by Franklin County restaurant Mangia 850.

The cost of the tour is $40/per person and can be booked through Madison Social’s website at MadisonSocial.com/gear/events.

The Tally Brew Bus also has two other trips planned after that, if you're interested: Nov. 9 to the "Destin Crafted"  Craft Beer, Bourbon and Food Festival ($50 for the ride, $40 for the festival ticket), and then the second trip on the schedule is Nov. 30 to Gainesville for the annual FSU-Florida football game ($45 for the ride; game tickets will need to be secured on your own).

To keep tabs on the Brew Bus' schedule and upcoming events, visit tallahasseebrewbus.com and get added to the email list!